Jetoptera, Inc. has successfully commenced the VTOL test campaign of their proprietary Fluidic Propulsion System™ (FPS). A test bed of more than 50 kg (110 lbs) equipped with a new vectoring-capable version of the FPS design demonstrated in flight earlier in the year is used to prove the concept of vertical takeoff and landing as well as in hover mode. Initial tests show excellent take-off thrust vectoring capability via a moveable FPS that can be swiveled more than 90 degrees from the horizontal position using uniquely designed and built swiveling joints. The technology can achieve a smooth transition to and from vertical to wing-borne flight as well as unique maneuverability and lift augmentation. The test campaign will also provide valuable data for a STOL version with minimal take off length. The company already offers its part 107 compliant J-55 product featuring either a tail sitter or conventional take off configurations. All subsequent Jetoptera products up to and including the J-4000, a four-seater VTOL aircraft, will employ the fluidic propulsion system. 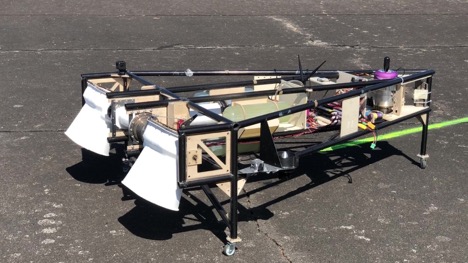